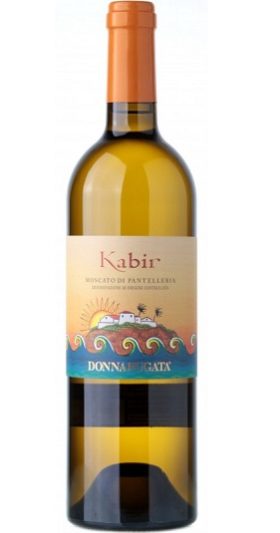 Brilliant straw yellow in colour with a golden hue, the Kabir 2018 is characterised by a rich and fragrant bouquet. The elegant aromas of nectarine, citrus zest, orange blossom and white flowers are enriched by savoury herbal nuances. The palate is ample, with a fresh acidity and minerality that balances the pleasant sweetness. The finish is long, revealing hints of pink peppercorn and nutmeg.

Vines are planted in hollows in the ground, at altitudes of 20-400 metres above sea level on terraced, sandy slopes of volcanic origin. The low bush vines of Pantelleria have been described on the UNESCO World Heritage List as a ‘creative and sustainable practice’. The vines are over 100 years old and are ungrafted.

The Rallo family has made wine in Marsala since 1851 and their ancient cellars tunnel beneath the city. They were one of the first families to begin making high quality table wine when sales of traditional Marsala started to decline, launching the Donnafugata label in 1983 and championing the potential of the region’s native varieties. Today, Donnafugata has four estates in Sicily: a modern winery and 283 hectares at Contessa Entellina in the hills east of Marsala; 36 hectares in Vittoria to the south eastern point of the island; 68 hectares on the island of Pantelleria; and 18 hectares on the slopes of Etna. Donnafugata means ‘fleeing woman’ and is a reference to Queen Maria Carolina, who escaped the court of Naples in the early 19th century with her husband, Ferdinand IV of Bourbon, when Napoleon’s troops arrived. The couple took refuge in Sicily at the Santa Margherita Belice palace, also the favourite residence of celebrated writer Giuseppe Tomasi di Lampedusa and depicted on the ‘Mille e una Notte’ label.