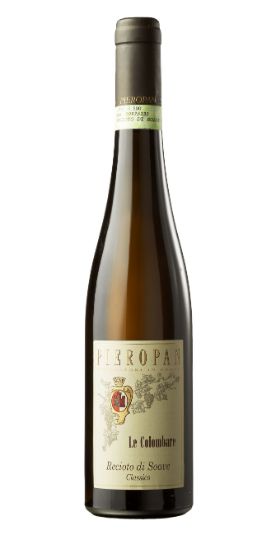 This Recioto di Soave has an intense gold colour with perfumes of dried apricots and lightly toasted almonds. The wine has a perfectly balanced palate, with just the right level of delicate sweetness offset by fresh acidity. Lovely, rich, almost exotic fruit comes through on the palate, with a baked peach character and a long, perfumed finish.

Grapes are picked from a range of different vineyards on the Pieropan estate. The vineyards are situated on volcanic soils, situated at 300 metres above sea level. The 30-year-old vines are trained according to the traditional Veronese pergola system, with 3,000 vines per hectare.

Straight after picking, the grapes were laid on straw mats in a well-ventilated loft to dry for approximately five months. The name derives from the fact that only the best part of the bunch is used – the ‘recie’ or ears of the bunch. These grapes are the ripest because they have had the best exposure. A small amount of botrytis was encouraged, approximately 10-15% in total. In early spring, the semi-dried grapes were pressed, then the must was fermented at temperatures of 14-18°C, and aged in 2,500 large oak casks for two years. The wine spent a further six months in bottle before release.

Pieropan’s estate covers 58 hectares of vineyard which are situated on the stony hills of Soave Classico. The Pieropan family has been producing wines in Soave since the 1890s. Indeed, they were the first producer to bottle a wine with the name Soave on the label in the early 1930s. Nino Pieropan took over from his father in 1970 and was the first producer in Soave to make a single-vineyard wine, ‘Calvarino’, in 1971. Nino’s two sons, Andrea and Dario, took over the running of the estate in 2017 when Nino fell ill and before he passed away in April 2018. From the 2015 vintage onwards, all Pieropan wines are organically certified.